The monumental heritage of Becerril de la Sierra is rich and diversified. In addition to the various fountains that fill up public squares and street corners, which are a tribute to the wealth of water in our municipality, there are other important monuments that you can discover when you take the Urban Route of Becerril de la Sierra. There are information panels at each monument that provide interesting and entertaining details about them.

The trail starts at “Plaza de la Constitución” in front of the City Hall. Go down through Barcelona Street up to the “Fuente de los Cielos”, which was built in the middle of the 20th century. This fountain was located previously some meters up from its current location, giving the name to the square where it’s placed.

Continue moving down to Zamora Street while viewing and contemplating the most preserved traditional houses of the municipality, dated back from 17th to 19th centuries. They are made of stone and they reflect the rural and austere lifestyle of the people of Becerril at that time.

Keep on moving through “Plaza del espejo” (Mirror square) where you can find “Fuente de la Bola”, whose name comes from a stone ball made of granite.  It consists of two pipes and a rectangular basin. In the past, it was known as “Fuente del Espejo” (Mirror fountain), because of a mirror located in front of the fountain, which also denotes the name of the square.

Walk through the street of Peña Quintero until you arrive at the church of Saint Andrew the Apostle, built in rural Baroque style with Herrerian influence and dating back to 16th to 17th century. Its base or podium is rectangular in shape and made of granite.

Come back through Jose Antonio Avenue up to the “Monumento de Piedra” (Stone Monument), recently built, which commemorates the craft of masonry (stonework), which disappeared in 1985 because it was banned after the declaration of the Parque Regional de la Cuenca Alta del Manzanares, even though a large proportion of the population where employed there.

The route finishes by returning to the “Plaza de la Constitución”, through Bilbao street, after passing through “Fuente del Caño”, originally built in 1889 and rebuilt in 1982, and still known today as “Fuente del Francés” (French Fountain) because of its proximity to a store owned by a Frenchman. 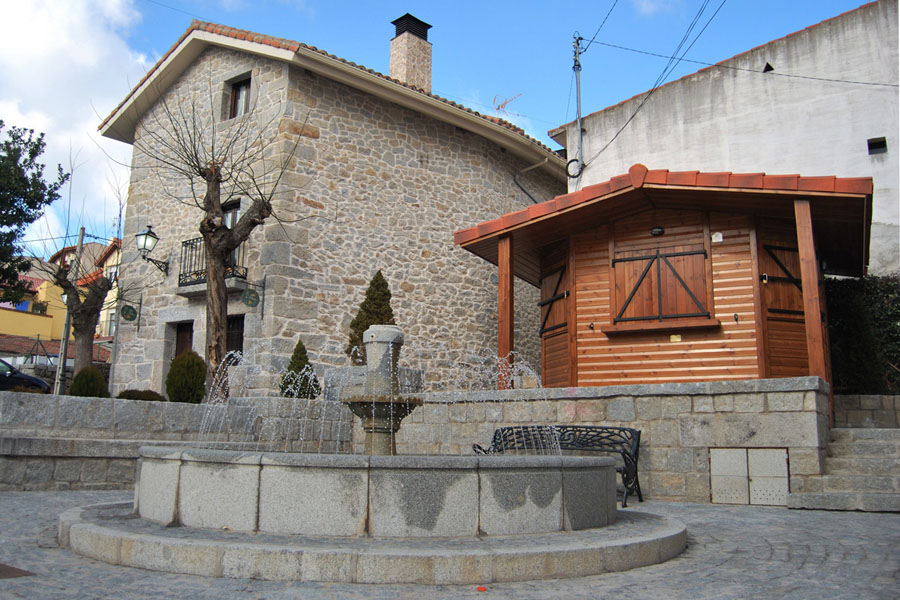